How is the price constructed?

You cannot simply link the fuel price directly to the price of crude oil. This price is formed by the influence of all kinds of factors, ranging from production costs, government excise duties and taxes, over natural supply and demand to the local market.

In the meantime, the government has decided to temporarily lower excise duties and VAT on fuel. 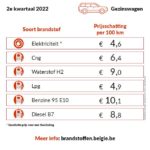 Do you have question about our Fuel Cards?